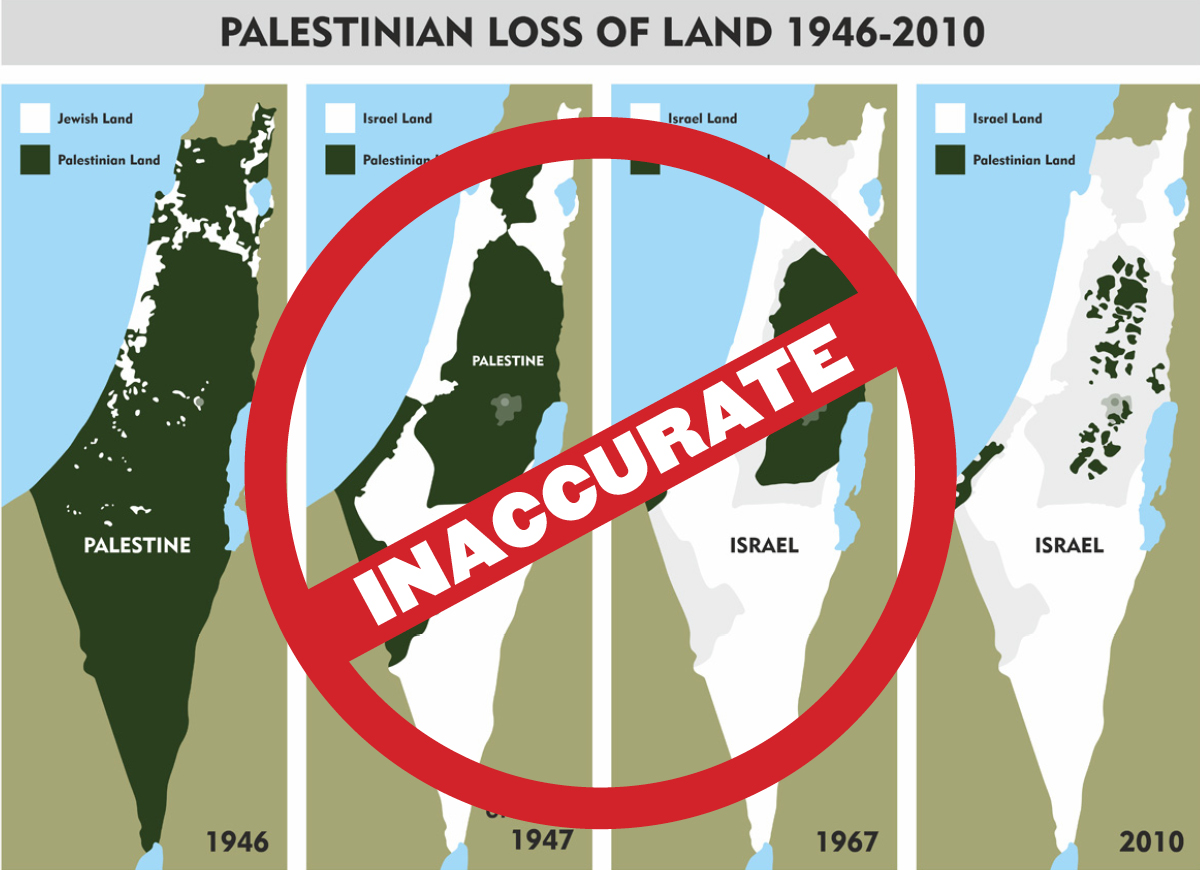 These “maps” have been widely circulated by the BDS movement, and they are misleading and dishonest. They appear in the “Zionism Unsettled” study guide. They appear on the websites of the Israel Palestine Mission Network (IPMN) and the Presbyterian Peace Fellowship (PPF). They also appear in the supporting materials for the BDS overtures submitted to the 2014 and 2016 Presbyterian General Assemblies.

Now let’s consider the 1967 map in terms of “ethnic cleansing”, keeping in mind that before 1948, both Jews and Arabs lived in all of the areas of the British Mandate of Palestine, including the West Bank, Gaza, and East Jerusalem. It is quite common to hear that the entire West Bank is “Arab Land” and always has been, but numerous Jewish communities existed in what is now the West Bank prior to 1948. These communities were attacked and wiped out by Arab mobs in 1920, 1929 and 1936 and during the war waged by Arab militias and Arab governments in 1947-48.  Here are some facts:

Until it was wiped out by Arab riots in 1929 in what is known as the Hebron Massacre, there was a large Jewish community in the center of Hebron

The Jewish population of Jerusalem (which has had a Jewish majority since at least the second half of the 19th century) was dispossessed by the Arab riots of 1929 and 1936 (when Jews fled most of what is now called the Muslim Quarter). In 1948, the Jordanian Legion expelled all of the Jews then living in what is now East Jerusalem and destroyed its holy places.

Sizeable tracts of land owned by Jews in the rural West Bank – including the Gush Etzion settlements, land between Nablus, Jenin and Tulkarm, and in Bethlehem and Hebron – were seized by the Jordanians in 1948.

The ‘Jewish settlements’ north of Jerusalem, Atarot and Neve Yaakov, were evacuated in 1948, under the declared threat of advancing Arab armies to massacre all the Jews in their path.

Today, hundreds of thousands of Palestinians live on land in and around Jerusalem that is still owned by the Jewish National Fund, including the Kalandia refugee camp and the Deheishe refugee camp south of Bethlehem.

Photo below: Jews being expelled from Old City by Jordanian forces 1948

In 1967, the only land in in Israel-Palestine that was “ethnically cleansed” was the West Bank, East Jerusalem, and the Gaza Strip. All three areas were 100% ethnically cleansed of Jews after the 1948 war.  In addition to the photo above, review these additional 1948 historic photos of Jews expelled from the Old City.

The 2010 map misses the 1.4 million Arab citizens of Israel, who live and own land throughout Israel, and the thousands of Palestinians who own land and live in areas of the West Bank subject to Israeli security. It also fails to reveal that at the present time, the only “ethnically cleansed” land in Israel-Palestine is the Gaza Strip, which is ethnically cleansed of Jews. The population of Jews in Gaza is zero. Below is another table of interest, describing the “ethnic cleansing” of neighboring countries since 1948:

We urge you to view this compelling video that tells the story of the Jewish Refugees from Arab countries:

The Middle East today is the most violent and dangerous place on earth. The BDS movement’s use of the “loss of land” maps and the constant reference to Jewish “ethnic cleansing” is reckless, dishonest, and contradicted by the plainly observable facts. It is throwing kerosene on a fire and the very antithesis of Christian peacemaking.

For a pdf file version of this article, click below: