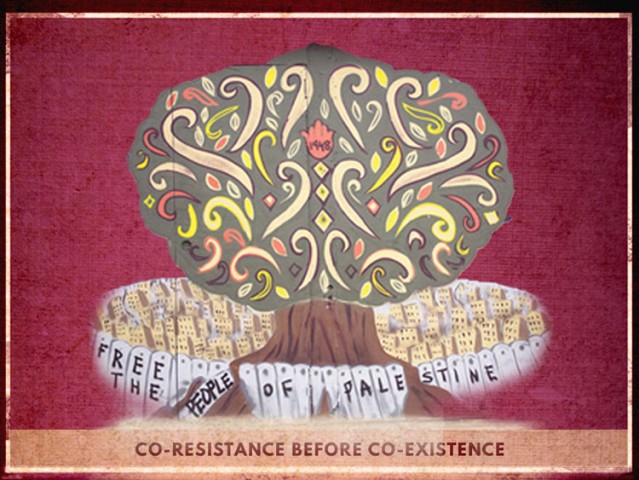 We recently received a mailer on an upcoming trip to Israel and the Palestinian territories from a Presbyterian group, the Presbyterian Peace Fellowship. What got our attention was the graphic within the mailer:

The slogan at the bottom of the graphic, “co-resistance before co-existence”, tells us that co-existence is no longer the priority for the Presbyterian Peace Fellowship. The words of Jesus in Mathew 22:34-40 no longer seem to prevail. The Gospel’s and PCUSA’s call for reconciliation and co-existence becomes secondary and conditional. Instead there is a call for “co-resistance.”

What does it mean to put “resistance” before co-existence? Is it not denial that the solution to the conflict comes from bringing both sides together? Calls for “resistance” are central to the Israel-targeted BDS Movement, widely recognized as nothing more than a campaign to delegitimize Israel and deny the right of the Jewish people to self-determination. Also central to the BDS movement is overt and sometimes violent opposition to the many organized co-existence projects that bring ordinary Palestinians and Israelis together to know one another. This is not the call of the Gospel, and not a path that Christians of conscience should follow.

Peace and reconciliation go hand in hand. Grassroots efforts at co-existence are an essential foundation of the peace process between Palestinians and Israelis. This is the hard, people-to-people work essential for ending the conflict.

For Christians acting as peacemakers there is no question about this first and most urgent calling: to help the parties in conflict know one another, to see with the other’s eyes, and to love one another. The call comes with brilliant clarity from Jesus in Matthew 22:34-40:

34 Hearing that Jesus had silenced the Sadducees, the Pharisees got together. 35 One of them, an expert in the law, tested him with this question: 36 “Teacher, which is the greatest commandment in the Law?”

One of our PFMEP leaders recently returned from a study trip to Israel dedicated to conflict-resolution and peacemaking, with the goal of helping participants better understand the dynamics of the Israeli-Palestinian conflict. The trip was designed to expose participants to a wide variety of viewpoints, and to see that there is not just one narrative, nor two, but many. The goal was not to convince the participant of the inherent value of one narrative over another, but to realize that a first step is in understanding those narratives. Great lengths were taken to respectfully hear as many viewpoints as possible, ranging from the Israeli government officials, Israeli leftist NGOs, Israeli-Arab activists, settlers, Palestinian activists, women peace activists, and many others. This was Christian peacemaking at its best.

The trip planned by Presbyterian Peace Fellowship is based on “co-resistance before co-existence,” a distortion of interfaith work by any definition. It is unfortunate that this group will be seen by many as speaking for our denomination. It goes against the actions of the last Presbyterian General Assembly that reiterated support for both Israelis and Palestinians to self-determination and for a two-state solution. It is also unfortunate that a partner in the proposed trip is the radical anti-Zionist group Jewish Voice for Peace, a group that called upon a woman convicted of murdering Israeli civilians as a keynote speaker at their annual gathering.

We call upon our sisters and brothers engaged in peacemaking trips to Israel and the Palestinian territories to lift up and support the courageous Palestinians and Israelis standing for peace through the many organized co-existence projects underway. The co-existence movement is strong, growing, and needs support from all of us. Join it.